How Outdoor Learning supports and extends learning from inside the classroom 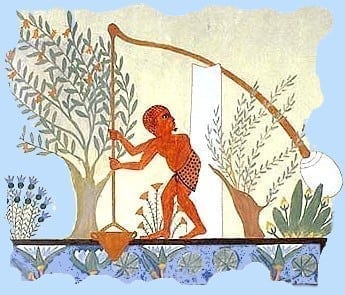 I may be showing my age, but it was about twenty six years ago when my teacher thrust a text book under my nose showing a picture of some Ancient Egyptian contraption he had called a ‘shaduf.’ It all looked a bit primitive to me. I remember looking at it with glazed-over eyes, thinking,

“How on earth did the Ancient Egyptians use that to irrigate their crops? And… Why would I possibly need to know that when I Ieave school?”

Being a primary school teacher, it turns out I would need to know about Ancient Egyptian irrigation techniques when I left school, seeing as Ancient Egyptians are featured on the History National curriculum. However, I was determined I was going to make the lesson more motivating and useful than the lifeless image of sticks that I peered at with glazed eyes those twenty something years previously. I was eager to make the learning meaningful and fun. I decided to take the lesson outside…

“Tie these strong sticks with a shear lashing, you know, the one we learnt a few weeks back when we built the tripod frames for our Ancient Egyptian stick pyramids.”

“Our frame base needs a more acute angle to make it higher; push the sticks closer together.”

“Let’s place it upstream, we don’t want to harm the minnow fish; they like hiding in the reed grass here.”

“Lower the bucket where the stream narrows, the water is flowing faster there and it will fill quicker.”

“I’ve filled the bucket but it’s too heavy, I can’t lift it. The counter-balance needs to be heavier; what about if we add this rock to it?”

“Swing it clockwise… watch our for Jack’s head!”

“I could make one of these in my garden at home this weekend to move the soil for my vegetable patch.”

These were just some of the conversations I heard between groups during my recent outdoor lesson on Ancient Egyptian Farming. I’d set them the challenge the day before. I explained that they would work in small groups to build their own version of a shaduf in our Outdoor Learning area. They were to use their shaduf to transport water from the shallow stream to irrigate the ‘Egyptian’ seeds they planted last week. I had shown them a picture, (not dissimilar to the one I had been shown twenty six years previously), to sow the seeds of thought in their minds overnight. Despite the drizzle, all of the children were eager to get outside, the next morning. Whilst walking the short distance to the shallow stream, the air was buzzing with their conversations of angles and methodologies: who would gather what; which skills could each of them offer to their group dynamics. There definitely wasn’t any sign of ‘glazed-over eyes’ or comments of: ‘why do we need to do this?’

Some groups initially couldn’t get their frame to stand up, but by trial and error and adapting their design, they worked out the angles needed independently and successfully. The usually shy child was beaming when she was given the title of ‘chief knot tier,’ due to her success, and was happily teaching others her technique. The child who was often restless in class was actively measuring and comparing the shapes and angles on their lever with intense concentration. All groups were praising each other’s efforts, communicating their ideas, and all of the children were on task and having fun. Groups managed their own safety and were actively and automatically risk-assessing their techniques.

Taking the lesson outdoors did not mean I had to find more time in my timetable. It did not mean I had to squeeze out any of my other lessons. I was simply teaching the same objectives, but outdoors. I was utilising the outdoor environment to enrich learning and make it more meaningful. Through taking the lesson outdoors, I was actually able to cover many more objectives in a single lesson through facilitating cross-curricular learning. I had extended learning for all abilities. The children were actively engaging higher order thinking skills through practical experiential learning. All they needed was the ‘hook’ of the challenge; the children initiated their own learning pathways and skill developments.

With all of my pupils eagerly on task, this gave me an opportunity to stand back and observe and assess their learning. All children were developing their mathematical skills through consolidating knowledge about measurements, shapes and angles. Without even knowing it, the children were extending this knowledge through experimenting with Pythagorus theories and ratios, long before they had reached secondary school. The children tested scientific theories of materials and forces, and developed scientific enquiry skills whilst connecting to and learning about their natural environment. All children extended their geographical knowledge by observing the river and it’s features whilst choosing the best location to build their shaduf. The children were designing and building their own models and designs, utilising previously taught skills and extending these to their own methods. Not all of the contraptions looked like the models in the picture, but what did that matter? The children had developed their confidence to use their creativity and adapt their designs to overcome any problems. They had developed a great sense of achievement and self-esteem. They were all equally impressed with each group’s varied techniques and finished products and wanted to test them and improve them for what seemed like hours. Children were openly interacting and conversing, teaching each other new skills and sharing their ideas. I was able to holistically develop every single one of my twenty five pupils by taking the lesson outdoors.

On return back to the classroom, the children had a healthy glow about them and the atmosphere was buzzing. Twenty six years on, I now realise that there is much to be learnt from the Ancient Egyptian’s and their Shadufs. Much more than ticking a box on the KS2 History Objectives checklist by looking at a picture and reading an associated caption in a textbook.

Should we have fires as part of outdoor sessions?
February 21, 2020

Why we need curiosity and how outdoor learning can foster it
February 2, 2020

Sign up to our Newsletter for great offers and free material!